Hey, just what is a “chock” anyway, and why is it always full? Hmm. In part 2 of our Windows 10 review, we took a broad-strokes look at how Microsoft has made Windows 10 a big improvement over its predecessor, Windows 8, by re-emphasizing use on “traditional” PC’s and scaling back or refining the “Modern”-style tiled interface. In the third and final part, we’ll be going over some of the most notable new features introduced in Windows 10. 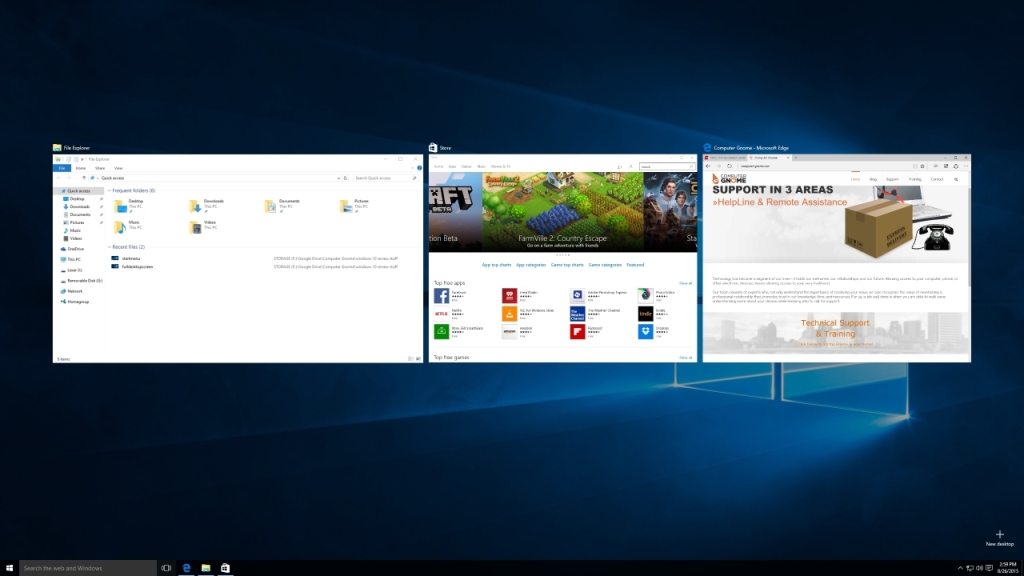 Microsoft has taken a lot of mockery in recent years for copying all of the best features of Apple’s OS X and integrating them into new versions of Windows. And there’s no getting around it, Windows 10’s Task View feature isn’t at all an original idea. It’s very similar to a feature called Mission Control which Mac users have had for some time now. But a good idea is a good idea no matter where it came from.

Task View is a new button that appears on the Windows 10 taskbar, near the returned Start button. When you click on it, you’re given a zoomed-out, birds-eye-view of all of the windows for all of the programs you currently have open. From Task View you can close any windows or programs that you no longer need open, create new “desktop” spaces, move windows from one desktop to another, and switch between desktops. This is a nice way to get your bearings if you’re the type of person who tends to end up with, say, four Excel files, a browser window, six Word documents, and five different Explorer folders all open at once when you’re multi-tasking.

Searching From Your Desktop

The other new button that lives on the Windows 10 taskbar alongside the Start menu and Task View is “Search the Web and windows.” Clicking on it and typing will allow you to search by name both for files and programs on your computer and search the Web without needing to open a browser. By default, this feature uses Microsoft’s Bing search engine; if you prefer Google and use Chrome as your regular desktop browser, you can install a Chrome extension that will make the Windows 10 search use Google and open results in a Chrome tab instead. For the purpose of finding things on your system (like a misplaced document or a program you don’t use very often), the Windows 10 search is a definite improvement over the local search in previous versions of Windows. For searching the Web, there’s nothing earth-shattering here, but Windows 10 has made things just a little more convenient by saving you a click and letting you search without opening a Web browser.

Windows 10’s search is also tied into Cortana, which is Microsoft’s new virtual assistant – similar to Siri on the Apple iPhone and iPad, and Google Now in Android devices. Cortana probably isn’t up to the same level of quality as its competitors from Google and Apple yet, and you may or may not find it necessary or useful, especially if you’re already used to using Siri or Google Now for the type of life-organization tasks Cortana is designed to do. Still, it’s a forward-thinking move by Microsoft to integrate this kind of functionality into the operating system, and there’s no reason to think Cortana won’t continue to be improved.

Action Center is technically not a new feature for Windows 10; at least, there’s been something called Action Center in Windows for a while. Windows 10 totally reimagines the Action Center, though, and gives it the potential to be a lot more useful. In previous versions of Windows, Action Center was just a place for showing you notifications and alerts about your system itself – that there were new Windows updates to install, for example. In Windows 10, Action Center is a central hub for showing you notifications from a wide variety of programs you have installed – new e-mails, social media messages, etc. – in addition to system-related alerts. It’s a lot like the notification system on your smartphone or tablet. Action Center also allows you quick access to a number of system actions and settings, like viewing and connecting to wireless networks or switching into tablet mode if your computer has a touchscreen. The only downside here is that the new notifications in Action Center only work with the built-in Windows apps or ones you download from the Microsoft store – you’ll be able to see notifications about new mentions or replies on Twitter if you install and set up the Twitter app from the store, for example, but you won’t get any notifications if you prefer to use use Twitter via the Web. Still, Action Center has gone from a feature of Windows that was at best pretty forgettable to one that some people may find extremely handy.

The last feature of Windows 10 we touch on is one of the most important, but it’s not a feature you’re likely to ever notice much at all. In Windows 10, Windows updates are now completely automatic. The operating system will regularly check for updates and install them automatically without prompting or intervention from the user. The goal of this change is to better protect users from security exploits and malware. While there’s been some debate about whether Microsoft did the right thing in taking users out of the chain of command when it comes to installing updates, we think that all things considered, this will be a positive change for most people. Certainly there are drawbacks; Microsoft isn’t infallible, and there have already been cases in the past where Microsoft pushed out a Windows update which actually caused problems a subsequent update had to fix. Occasional hiccups like this are a small price to pay for users having peace of mind that their computers are better protected from security threats, however. Whether because of procrastination or forgetfulness, many people fail to keep their computers up to date with patches for the newest security exploits, and fall victim to irritating malware, data loss, or even identity theft as a result. For most of the people we work with, having critical Windows updates downloaded and installed without needing to lift a finger will be a huge benefit.

Conclusion: Come On In, The Water’s Fine

Are all of Windows 10’s new features worth getting excited about? No. Is Windows 10 perfect out of the box? Certainly not – no new operating system is when it’s first released. One of the great things about Windows 10, however, is that we shouldn’t have to wait as long for fixes and improvements as we did with previous versions of the operating system. Microsoft is advertising Windows 10 as the “last” version of Windows – but that doesn’t mean that they’re getting out of the operating system business. What it means is that Microsoft is changing the way it develops Windows. Instead of releasing a new, radically different version of Windows every few years, Microsoft’s plan is to make smaller tweaks to Windows 10 on a more frequent basis so that instead of being replaced, it will continually evolve and (hopefully) improve.

After one month of using Windows 10 as a “daily driver” operating system, though, it looks like Microsoft is already off to a strong start. Would we recommend upgrading to Windows 10 if you’re eligible to do so? Well, maybe. If you’re comfortable with Windows 7 or Windows 8/8.1, there is no one single “killer app” game-changing feature in Windows 10 that we would say makes upgrading a must. What we will say is that if you’re afraid of upgrading – don’t be! Microsoft has clearly listened to user feedback, learned from their mistakes, and gone back to the drawing board to create an operating system that almost seamlessly blends the familiar feel of Windows with forward-looking, mobile-inspired features. Microsoft has even catered to users who are nervous about upgrading by making it painless to “roll back” to your old version of Windows if you try out Windows 10 and find it’s not your cup of tea – a feature we’ll be explaining in a future blog post. You’ve got nothing to lose by sticking your toe in the waters of Windows 10 – it’s a greater operating system now, and it’s only going to get better.

Whether you’re planning to upgrade or not, hopefully this three-part series has helped you make an informed decision on whether or not Windows 10 is for you. We didn’t come close to covering everything; some of new features included in Windows 10 (like Edge, Microsoft’s new browser which replaced Internet Explorer) deserve a post or two on their own. Keep an eye out for more coverage of Windows 10 from Computer Gnome in the near future. And if you’re thinking of upgrading, or if you’ve already upgraded and need help figuring out some of the finer points of Windows 10, give us a call!